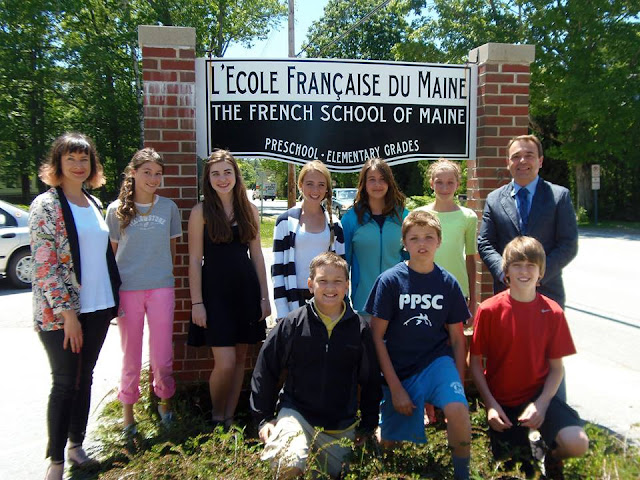 
The DELF Exam (Diplôme d'Etudes en Langue Française), designed by the CIEP (Centre International d'Etudes Pédagogiques), is an official qualification awarded by the French Ministry of Education certifying a level of fluency in French.  Recent efforts between French Accredited schools, AEFE, MLF and the CIEP allowed our school alumni to continue their study of the French Language and culture in a degree/certificate program.


This succes has encouraged our students currently enrolled and alumni (beyond 6th grade) to prepare  the A2, B1 and B2 exams of the DELF-junior next fall.


Offering the DELF in Maine was made possible through various partnerships and cooperative efforts.
The school wants to thank the following individuals for their assistance and collaboration:
- Elisabeth Karnoub, Fabrizio Mazzetta, Liz Brown of the French Cultural Center of Boston,
- Fabien Fieschi, Consul General of France at the French Consulate in Boston
- Anne Miller and Magali Boutiot, Cutural Attaches, at the French Consulate in Boston.
- Mark Sherringham (AEFE) and Jean-Claude Duthion (CIEP) at the French Embassy in Washington
- Sophie Polin at Mission Laique Française in Paris
- Marie-Catherine Glaser, Educational Affairs Officer at the French Embassy in Washington
- Elodie LeNezet and Emilie Paul, teachers, who recently became DELF accredited instructors / evaluators
- and the parents of l'Ecole Française du Maine alumni for their interest and support. 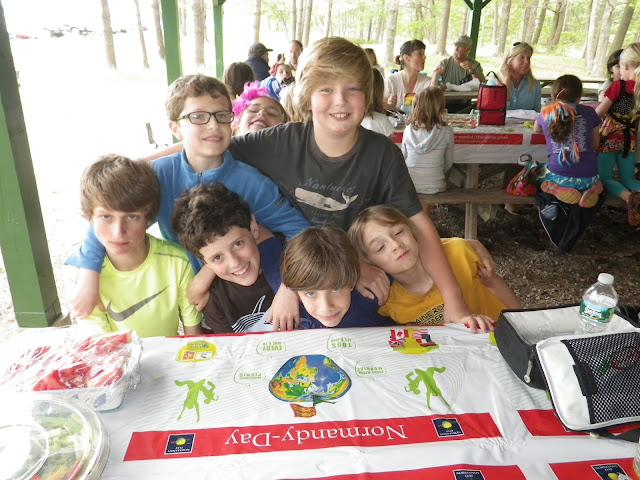 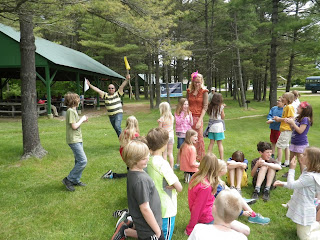 This year marks the 69th anniversary of D-Day, the Allied invasion of Normandy, which was the major turning point of WWII in Europe. Early in the morning of June 6, 1944, the largest military operation in history began as 135,000 Allied soldiers landed on the beaches of Normandy, to begin the liberation of Europe, and change the course of history. With Normandy Day, l'Ecole Française du Maine expressed its gratitude and appreciation for the sacrifice of so many for today's freedom. L'Ecole Francaise du Maine was the first American school to officially participate in this event two years ago and has partnered with Normandy Day organization in France which provided the school with the official table cloths. 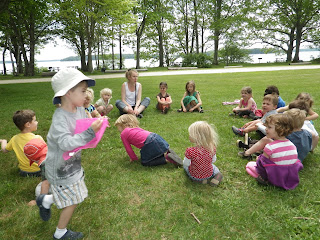 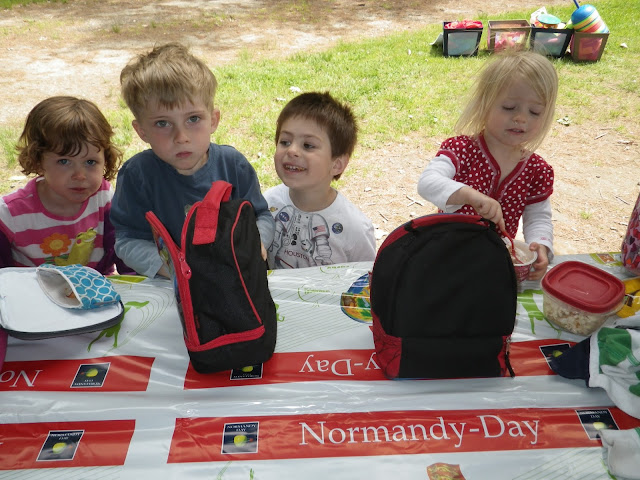 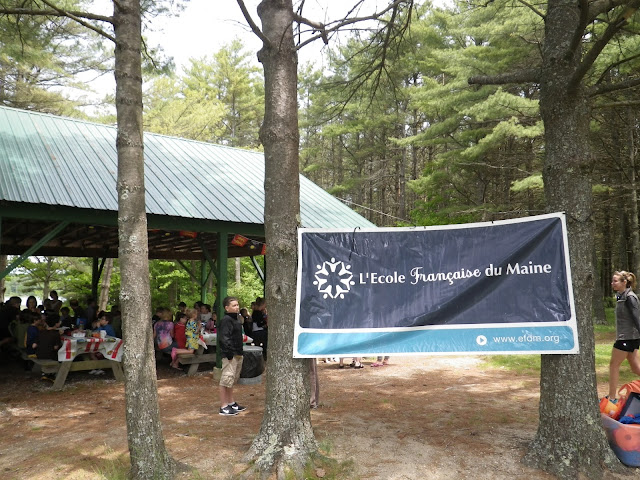 "Soldiers, Sailors and Airmen of the Allied Expeditionary Force!

You are about to embark upon a great crusade, toward which we have striven these many months. The eyes of the world are upon you. The hopes and prayers of liberty loving people everywhere march with you. In company with our brave Allies and brothers in arms on other fronts, you will bring about the destruction of the German war machine, the elimination of Nazi tyranny over the oppressed peoples of Europe, and security for ourselves in a free world.

Your task will not be an easy one. Your enemy is well trained, well equipped and battle hardened, he will fight savagely.

But this is the year 1944! Much has happened since the Nazi triumphs of 1940-41. The United Nations have inflicted upon the Germans great defeats, in open battle, man to man. Our air offensive has seriously reduced their strength in the air and their capacity to wage war on the ground. Our home fronts have given us an overwhelming superiority in weapons and munitions of war, and placed at our disposal great reserves of trained fighting men. The tide has turned! The free men of the world are marching together to victory!

I have full confidence in your courage, devotion to duty and skill in battle. We will accept nothing less than full victory!

Good Luck! And let us all beseech the blessings of Almighty God upon this great and noble undertaking." 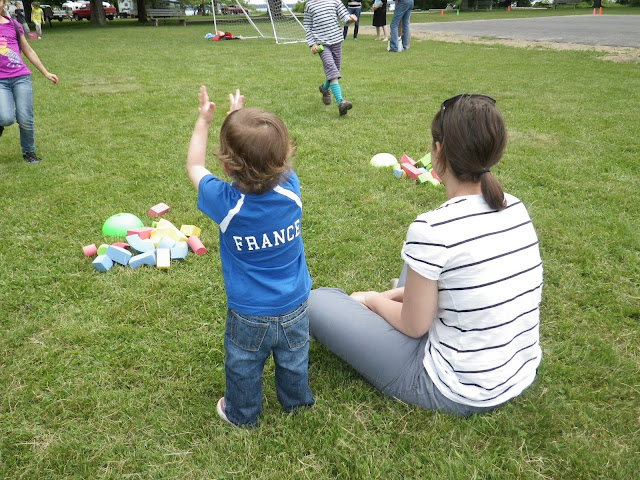 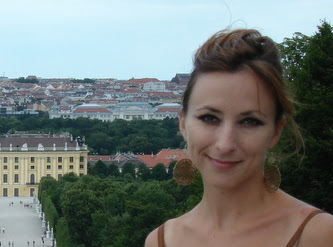 L'Ecole Française du Maine is thrilled to welcome Shaina Graff to its staff.
Shaina Graff began playing the violin at age three and music has been an integral part of her life ever since. Her studies have included various methods first beginning as a Suzuki student. Suzuki instructors include John Kendall and more recently Teacher Training from Ronda Cole, Kimberly Meier-Sims, and Cathryn Lee. She pursued a Bachelors and Masters degree in Music Performance at Southern Illinois University Carbondale graduating with honors under Hungarian Professor Michael Barta. Further individual studies with violinists around the world include Timothy Shiu, David Kim, and Geza Koposh. She was honored chamber music coaching with Cavani String Quartet and Kodaly String Quartet. During her studies, she appeared as concertmaster and soloist with the Southern Illinois Symphony Orchestra, as well as performed with the Chamber Music Society and Altgeld Chamber Players.
Shaina has been director of her own studio, Shaina's Strings Studio, which has been providing violin and viola lessons to aspiring musicians of all ages for over a decade. Her students are involved in community events, orchestras, performances, competitions, and have gone on to receive scholarships at the university level. Seeking to spread the enjoyment and passion for music to all, Shaina's Strings Students enjoy playing music of all genres with the fundamentals and technique to take them to unlimited possibilities. Shaina is a member of the Suzuki Association of America and String Teachers Association.
As a professional, Shaina performs with the Illinois Symphony Orchestra, Paducah Symphony Orchestra, and recently to include Midcoast Symphony and North Shore Philharmonic. Other performances include Chicago Chamber Orchestra, Union Avenue Opera, Tulsa Opera Co., Tulsa Symphony Orchestra, Winter Opera St. Louis, Illinois Chamber Orchestra, Fayetteville Symphony, Southeast Missouri Symphony, and the Southern Illinois Summer Music Festival Orchestra. Additionally to orchestral settings, Shaina is active in various performing styles and settings. In addition to educating and performing, Shaina is extremely passionate about chamber music. She served as vice president of the Southern Illinois Chamber Music Society and for over a decade as a violinist of the Chautauqua String Ensemble. She desires to create more opportunities for musicians and to enhance the musical connection with the community through chamber music.
Shaina has always been drawn to Maine and after visiting she fell in love with the state and the people. As a new resident to the beautiful Northeast, Shaina looks forward to making a positive valuable impact on musicians and music lovers of all ages. She treasures the role she partakes in each violinist's educational life and looks forward to unlimited possibilities to come.
Music is the Alchemy of Life.

We had to build a boat with play dough that could float ..