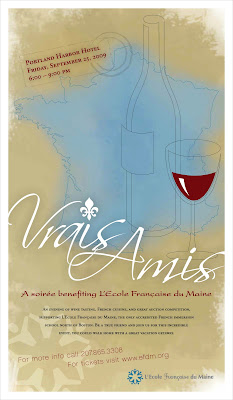 Article in the Portland Press Herald

Willy and Elizabeth LeBihan of South Freeport are certified teachers who share a common educational goal: for their three children to be raised speaking fluent French and English. As a result, they created the bilingual L'Ecole Francaise du Maine/The French School of Maine, in South Freeport.

This spring, the couple received the distinguished title of Knights and were awarded l'Ordre des Palmes Academiques (the Knights in the Order of Academic Palms) by Xavier Darcos, French minister of education. This distinguished honor, created by Napoleon, is one of the world's oldest civil awards.

French Consul General Francois Gauthier presented the award June 18 in recognition of the immersion school, where all academic subjects are taught in French by native speakers of the language.

The LeBihans started the school in 2002 in Winthrop with only 12 children, two of whom were their daughters. Soon thereafter, the school moved to a newly renovated sunny building in South Freeport, where students from Winthrop and southern Maine could easily commute. Today, 70 students are enrolled in kindergarten through the seventh grade. Adult French evening programs are also offered.

Elizabeth "Beth" Chaote LeBihan explains how the couple's vision for a French school probably began when she met her future husband while they were studying in Ireland. Beth's mother is a Franco-American who grew up speaking French in the Sand Hill neighborhood of Augusta. Her mother's roots date many generations to the MicMac tribe in Quebec.

Beth studied in Ireland as an exchange student so she could connect with her father's Irish heritage. Then she met Willy, a French national born near Paris and raised in Brittany, on the northwest coast of France. Willy was able to spark Beth's interest in her mother's French heritage.

"It all came back to us sharing a French heritage, even though he was studying English and I was learning about the Irish," Beth says.

When the couple married, they decided to raise their children to speak both French and English. "I was astounded by how effortlessly and quickly my very young children learned to be fluent in both languages," she says.

Maintaining that fluency was put at risk the day her oldest daughter came home from kindergarten and asked her mother to speak in English.

"At that moment, we realized something dramatic had happened. Our opportunity to continue speaking French at home was at risk," she says.

The LeBihans wanted to retain the bilingual skills they worked hard to learn. They put their many years of teaching experience to work for them by learning how to create a bilingual school. Their learning was on site, observing immersion programs in New Brunswick and in Brittany, France.

L'Ecole Francaise du Maine is modeled after French schools where children begin their education as toddlers.

"These awards are often received after a lifelong career," says Beth. "We are humbled by the recognition."

Gauthier, the consul general, was especially helpful to them when he visited the school. He extended his outreach throughout Maine to support Franco-Americans.

Development efforts to support the immersion school include the upcoming "Vrais Amis" ("True Friends") soiree. Sponsored by the Parents Association, the French wine tasting with silent and live auctions is scheduled for 6 to 9 p.m. Sept. 25 at the Portland Harbor Hotel. Information and tickets are available at the school's Web site, www.efdm.org.

Juliana L'Heureux can be contacted at: Juliana@mainewriter.com