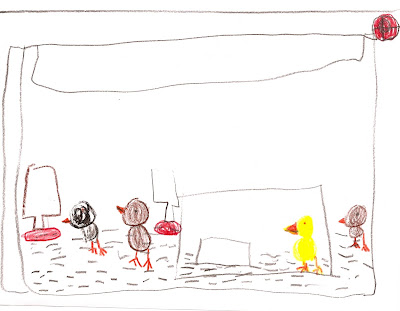 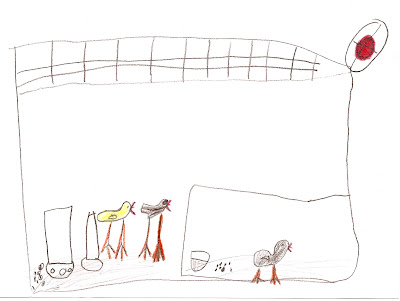 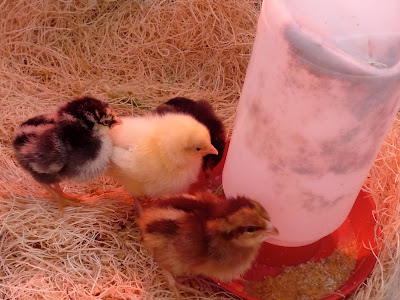 On Thursday April 29, Zoe brought four chicks to school. They came in the mail.
They are housed in a clear plastic box, with water, food and straw. There is a red lamp keeping them warm. One of the chicks was very tired and could not stand very well to walk. Beth put it in a smaller box and gave him sugary water.

On Thursday April 1 and Friday April 2, Clarisse went to the International School of Boston to continue the workshop on language in grades K-1-2 that was started in September.
This training -organized by the Mission Laïque Française and presented by Soizic Bonnet, pedagogical coordinator for French schools in the USA , was very interesting. Clarisse will be able to reinvest numerous activities of spoken and written language in the school. 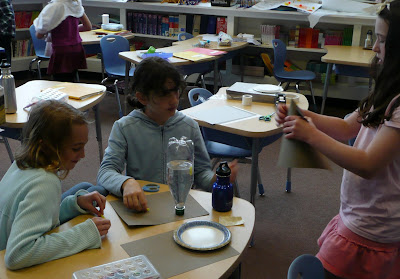 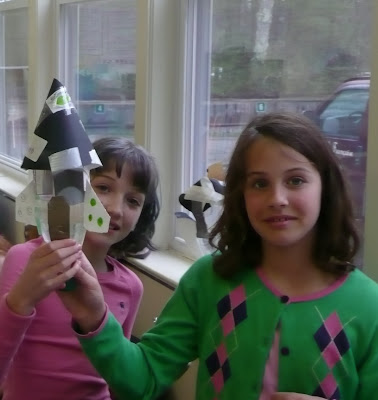 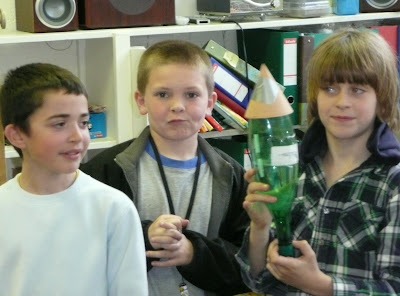 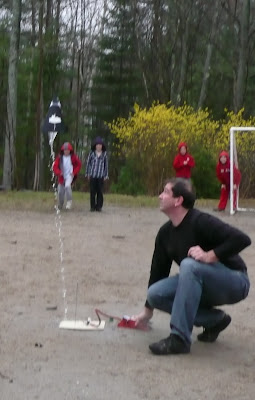 On Friday April 9 it was raining and the physical education class for grades 2-3-4-5-6-7 had to be canceled.

We decided to have a “science contest” instead.

We had previously been working on astronomy and had studied the properties of air and water. We used our knowledge to build bottle-rockets.

They would be propelled with compressed air!

Each group completely designed their rocket and chose parameters to make it go as high as possible:

- Guiding system on the launch pad

We then proceeded to the launching. We noticed everyone had done a good job and the results were impressive!

It was an afternoon of problem solving and learning, while having fun with a motivating project. 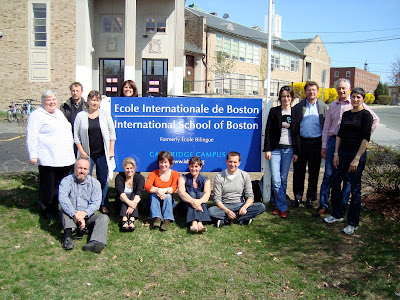 Nathan Kolosko at the Back Cove Contemporary Music Festival

I will be playing one of my compositions in the Back Cove Contemporary Music Festival this Sunday at 7:30 pm at Woodfords Church.

Following is a Portland Press Herald article on the event.
Nathan Kolosko

Hyde: Back Cove Contemporary Music Festival to beat with the pulse of Maine composers
By CHRISTOPHER HYDE

Last year's premiere came as a pleasant surprise to many traditional concertgoers, both for the quality and interest of the compositions and for the skill and enthusiasm of the performers.

This year's concert will feature many vocal and instrumental soloists plus the Bowdoin New Music Ensemble under the direction of Peter McLaughlin.

An additional point of interest is that every work on the program will be by composers now living and writing in Maine. The compositions range from neo-romantic and musical theater to a concerto grosso on themes related to robins. Others combine visual and audio effects, with one medium influencing the other.

Each of the three programs has something unique to offer, but from a purely personal standpoint, I was struck by several compositions that reflect some of my own musical preoccupations.

For example, I write each spring about bird song, which remains a mystery. I should have talked with Elliott Schwartz about sources.

His new "Round Robin" (April 17 evening concert) "uses the format of 'concerto' as its springboard, and also incorporates pre-existing fragments -- musical and otherwise -- into its texture. The work is influenced by the model of the Baroque concerto grosso, with four of the ensemble members taking a turn as soloists, and tutti passages separating each solo section. The format gave rise to the title 'Round Robin,' which in turn led me to use pre-existing materials related to robins. (Sources range from Adam de la Halle to Edward MacDowell to English folk song to Al Jolson.)"

Speaking of mysteries, Frank Mauceri's "Mortal Engines," which premieres April 18, asks Wittgenstein's question: "Why something rather than nothing?" in three-way conversations among saxophone, violin and computer audio processing.

Gia Commoli's work is always striking, and her "Icons" for solo violin, written for and played by her husband, DaPonte String Quartet violinist Ferdinand Liva, depicts icons from a Greek Orthodox church in Doylestown, Pa., where I grew up.

Readers of this column may remember a discussion about equal temperament on the piano, and how it adversely affects intervals in choral singing.

Philip Carlsen's "October," to be played by his son, Melsen, in the April 17 evening concert, "(calls) attention to the inherent out-of-tuneness of Western equal temperament. The idea was not simply to create dissonance but to employ voicings and doublings that trick the ear into thinking the piano is out of tune with itself. This is especially apparent in the doublings of the piano's extreme registers, playing on the curious phenomenon that for example, the lowest E on the piano seems to sound more in tune with the highest F than with the highest E."

In the April 17 afternoon program, Gregory Hall's "Mysteria" will attempt to revive the lost art of classical piano improvisation, while composer Beth Wieman, clarinet, and Anatol Wieck, viola (with DVD), "play along" with the visual premise that "Crows Everywhere are Equally Black."

The April 17 evening program also features the first concert performances of all six songs Daniel Sonenberg wrote for the play "Broken Morning" (2003) based on playwright Chiori Miyagawa's research into the prison industry.

Finally, I once wrote a book exploring the thesis that the builders of Stonehenge were the same non-Indo-European tribe that settled the Basque region of Spain, a thesis explored on the guitar by Nathan Kolosko on April 18 in "The Myth of the Fomorians," which poses the musical question: "What would the music of Ireland sound like if it were strongly influenced by the Moorish traditions of Northern Africa and Spain?"

Christopher Hyde is a writer and musician who lives in Pownal.

He can be reached at: classbeat@netscape.net 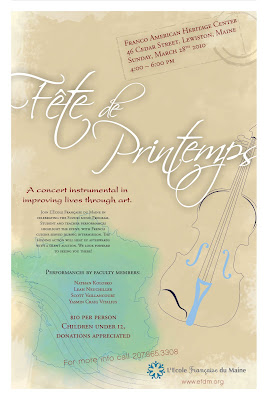 The March 28th, Suzuki Concert and Fundraiser, at the Franco-American Heritage Center, was a success thanks to all of you, the talented students and teachers. There are numerous people we would like to thank for their support of the school.

The teachers who spent countless hours preparing the students:

And our Silent Auction Sponsors: 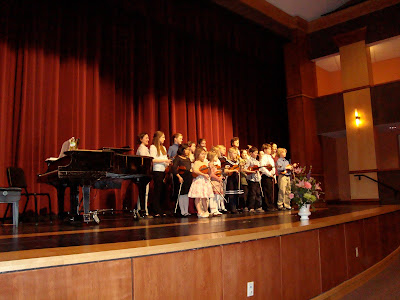 Congratulations to the students of Yasmin for an amazing violin studio recital, which was well attended. So much progress has been accomplished. The recital was followed by a potluck refreshments. Five current students and two former students of L'Ecole Française du Maine played during the recital. Bravo Yasmin and the students!