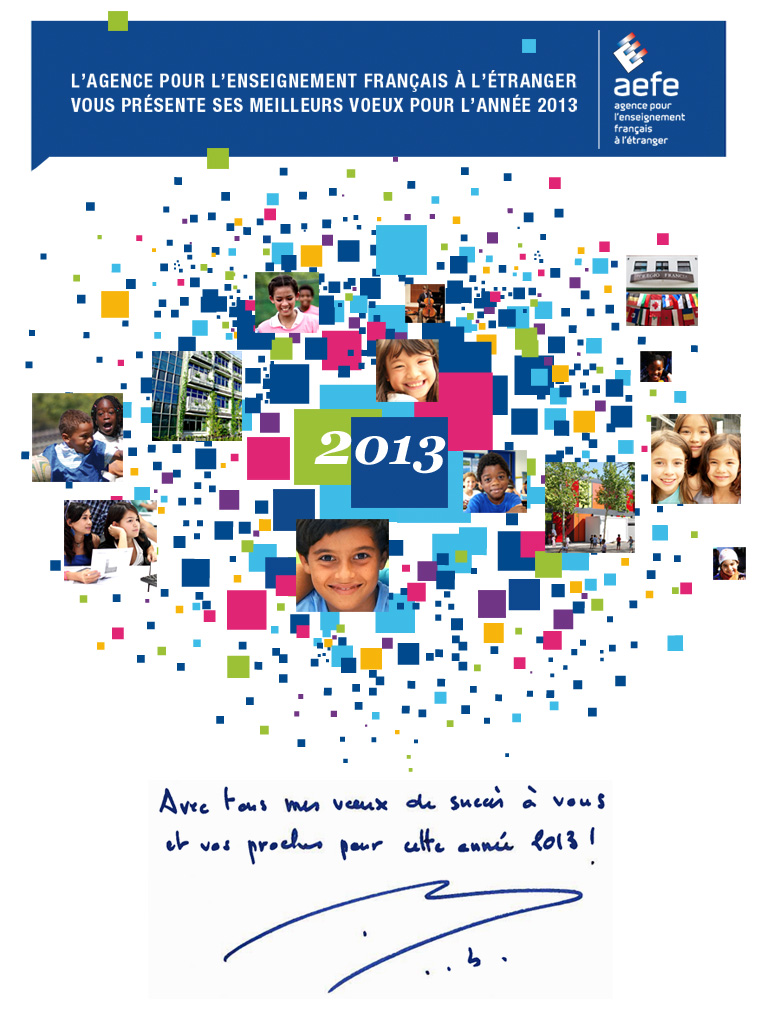 SOURCES:
1. According to the neuropsychologist, Eric Lenneberg, in his book Biological Foundations of Language, 1967, the capacity to learn a language is indeed innate, and, like many such inborn mechanisms, it is circumscribed in time. If a child does not learn a language before the onset of puberty, the child will never master language at all. This is known as the critical period hypothesis. This research was from a lecture given by Timothy Mason at the Université of Versailles, St. Quentin. It is available here:http://www.timothyjpmason.com/WebPages/LangTeach/Licence/CM/OldLectures/L3_ExtremeCircs.htm

2. An interview with Dr. Bialystok summarizes her findings. It is available here:   http://www.guardian.co.uk/technology/2011/jun/12/ellen-bialystok-bilingual-brains-more-healthy

3. According to Dr. Wilder Penfield and Dr. Lamar Roberts, Co-Authors, Speech and Brain Mechanisms, the human mind retains a ‘functional plasticity’ for a period of time that lasts from ages 3 to 12. This biological flexibility makes it the optimum time for language learning. More details can be found here: http://en.wikipedia.org/wiki/Critical_period_hypothesis

4. The American Psychological Association studied bilingual speakers. Brain-imaging research has shown that when people switch to another language, their brains make constant use of their executive control network, which involves the dorsolateral prefrontal cortex, anterior cingulate cortex, Broca’s area and the basal ganglia. Working out those brain areas may make these people better able to perform other activities that require switching, such as visual searches where people are asked to find the incongruent image or pattern. The study was summarized on the APA website: http://www.apa.org/monitor/2010/04/language.aspx

5. According to Dr. Laura-Ann Petitto of Dartmouth College, children who have been exposed early to a second language possess an overall "cognitive edge." Numerous studies have also linked language education to higher scores on many standardized tests. A synopsis of the work can be found here: http://www.early-advantage.com/articles/learningtoread.aspx
Additional details about Dr. Petitto’s work on bilingualism can be found on the Society for Nueroscience website here: http://www.sfn.org/index.aspx?pagename=news_11112003a

The Lady and the Unicorn is often considered one of the greatest works of art of the Middle Ages in Europe. Five of the tapestries are commonly interpreted as depicting the five senses – taste, hearing, sight, smell, and touch. The sixth displays the words "À mon seul désir". This tapestry's meaning is obscure, but is commonly considered as representing love or understanding.

Students were assigned to work in groups of 8 to reproduce one of the tapestries using felt. They did an outstanding job putting all the elements together, especially because using a glue gun was a challenge at times.

The lady is taking sweets from a dish held by a maidservant. The lion and the unicorn are both standing on their hind legs reaching up to pennants that frame the lady on either side. The monkey is at her feet, eating one of the sweetmeats. 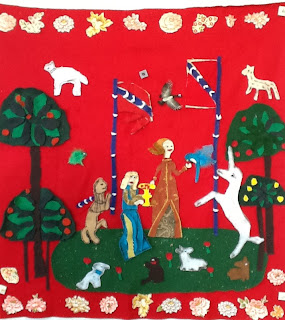 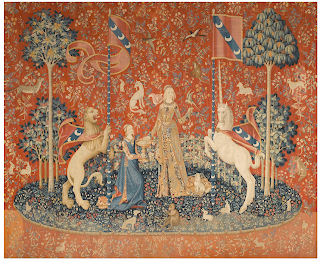 À Mon Seul Désir
The lady stands in front of a tent, across the top of which is written "À Mon Seul Désir", an obscure motto, variously interpretable as "by my will alone". Her maidservant stands to the right, holding open a chest. The lady is placing the necklace into the chest. 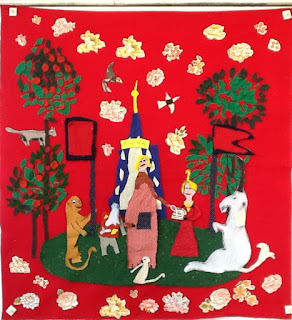 Lego Robotics and Mindstorm Programming are coming to the French School

The French school is now offering a Lego Robotics Club: Sandrine and Yassine went trough an intensive training with Tom Bickford, (Executive Director for Maine Robotics) to learn how to build and program robots to do what we want. There are many different steps that the kids are going to learn through the club: 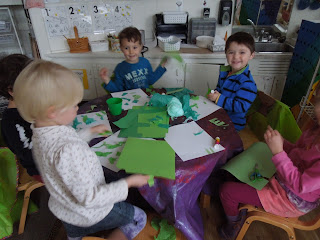 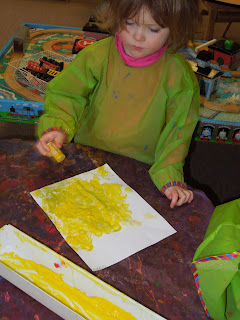 In the preschool class, we are working hard to prepare our book of colors! We are creating one page for each color using different techniques: painting with rollers, sponges, toothbrushes, making imprints of corks, stamping different kinds of papers or cotton.   The "moyenne section" children are also learning to reconstruct and write the names of some colors. We love to look at all the pages that we have already finished and see our book getting built! 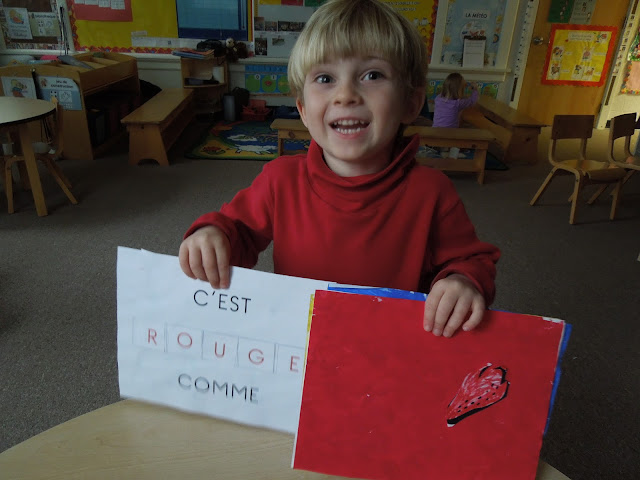 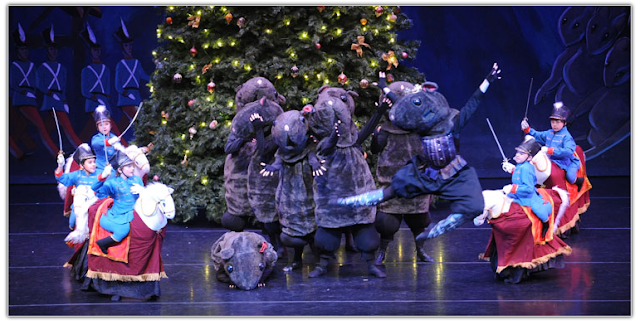 Students in grades 2, 3, 4 and 5 went to see the Nutcracker Backstage at the Portland Merrill Auditorium on November 27th. The show demonstrates how the ballet's special effects function. In the ballet, there is a tree that is towering 40 feet above the mouse battle. This tree is the tallest ever on Merrill Auditorium's stage. They showed us how the 10 man crew is making the tree grow and shrink. Also they showed us how the snow falls on the dancers and how they clean up and re-use the tiny pieces of paper over and over again. Full-scale Nutcracker productions require a large number of dancers, many of them children; this year more than 200 Maine State Ballet dancers and students from Maine State School for the Performing Arts participated in one or more performances.
We had a great time! 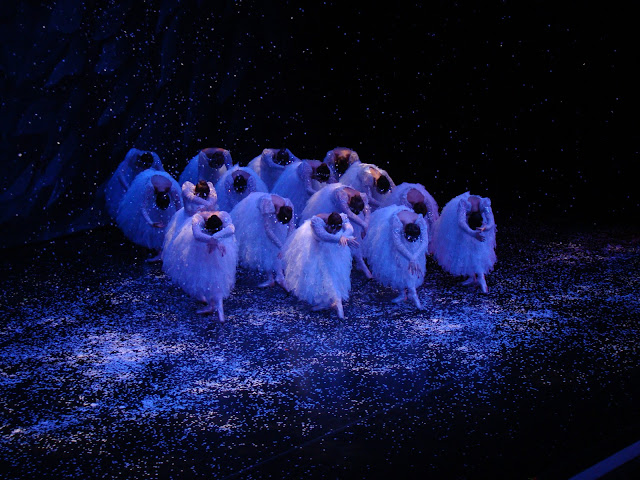 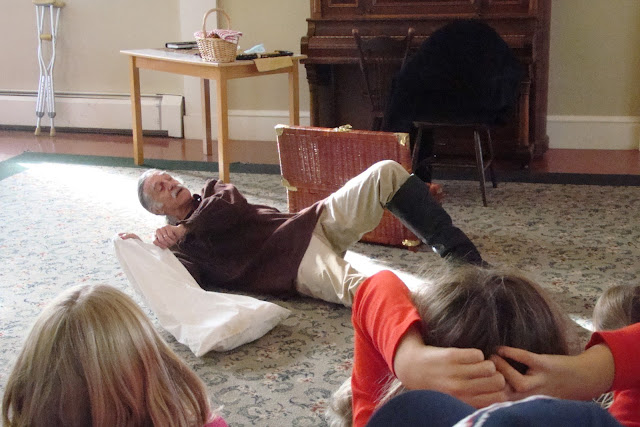 Last week, Joe Scott came to the school to tell us some French stories by Charles Perrault.
We listened to: "Little Red Riding Hood"  (Le Petit Chaperon Rouge), Puss in Boots  (Le Chat Botté), The Ridiculous Wishes  (Les Souhaits Ridicules).  Some stories were a little hard to understand because some words were in old French. Fortunately, Joe brought some objects to describe each story. Some parts were fun, some parts were scary or mysterious.

Joseph Scott, is a retired French teacher with 45 years of classroom experience and a wide variety of presentational experience.  He is an active member of the Alliance Française of Providence, RI and was recommended to the school by the Cultural Attache Office at the French Consulate in Boston.
We hope Joe will be back with more stories ! 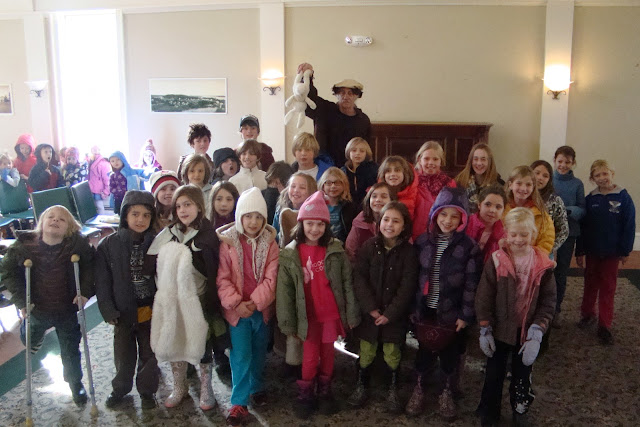 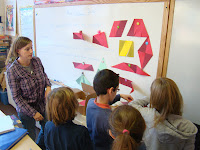 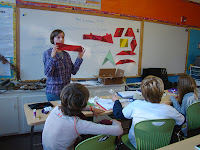 In 5th Grade Math Class, we are currently studying Quadrangles. In a first challenge, we had to assemble as many quadrangles as possible using 4 identical right-angled triangles. 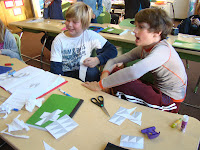 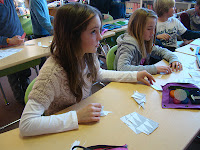 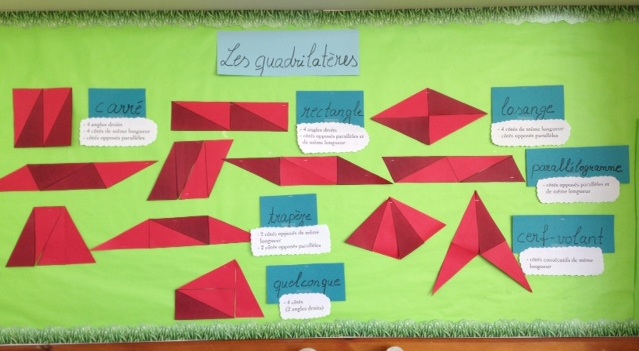 You can see the result in the classroom.